School of Information Sites
Skip to main content
Home / 2018 / July / 30 / Privacy and Anti-Trust
Privacy and Anti-Trust by Todd Young I have long been concerned about what mergers and acquisitions mean for privacy agreements.  Beyond my concerns about the notice-and-consent framework[1], it seemed to me that a change of ownership of the firm, as in the case of a merger or acquisition, is particularly problematic for individual privacy.  After all, people agree to share the personal information in a particular context, and a change of ownership of the firm can radically change that context. I could think of particularly sensational hypothetical mergers to elicit lively discussion with friends and colleagues:  What if Facebook bought 23andme and used the genetic information to map out families, and cancer-proneness?  (Facebook has shown interest in medical information[2]. A recent study showed how large DNA database can be used to identify individuals.[3])   What if BlueCross signed an information sharing agreement with Ancestry?  (Insurance companies are terrified of cheap DNA tests for consumers.[4])  Or what if Google bought FedEx and made business document shipping free but you had to agree to allow them to scan the documents as part of their effort to organize the world’s information?  (OK, there’s no evidence I could find of this, but it’s basically the same deal you agree to with your Gmail account.) How should we view such proposed mergers?  How should we decide if such a merger was harmful to consumers?  If such a merger was indeed likely to be harmful, who could we rely on to stop it from happening?  The Federal Trade Commission?  What monopoly would they be preventing?  What pricing power would the new company have if its apps were free all along?  Could it be considered a harm to accumulate too much personal information about people? I will discuss each of these issues and then look at a real case from 2014, when Facebook purchased WhatsApp for $19B where examine the reactions to this merger in the EU and in the U.S. and offer my opinion on it. Let’s start with legal framework of Antitrust, and its enforcers[5].  The FTC is a bipartisan federal agency with a unique dual mission to protect consumers and promote competition.  The FTC enforces anti-trust laws and will challenge anti-competitive mergers.[6]  Section 7 of the Clayton Act prohibits mergers that “may substantially lessen competition or tend to create a monopoly.”[7]  The process of evaluation is to: define the relevant market, test theories of harm, and examine efficiencies created by the merger. Relevant Market The FTC Horizontal Merger Guidelines[8], section 4, Market Definition specifies the line of commerce and the allows for the identification of the market participants, so market share can be considered.  I propose to use Jaron Lanier’s characterization of the social media companies as ones that collect personal information about consumers for the purpose of selling to other firms (chiefly advertising) the promise of behavior modification of those same users.[9]  The behavior modification could be to make a specific purchase of a product, or to “like” a particular tweet, or to read a certain news story, or even to attend a political rally. To me, what is interesting about this market view is that it allows us to consider the actual harms that consumers are worried about[10], as well as the harms that typically get reviewed by the FTC – price and market power.  Let’s take a deeper look at price. Price, in an economic sense, is the factor that balances supply and demand.  In a simpler way of thinking, price is what you give up for what you get, and Facebook users give up their personal information to use the platform ‘for free.’  According to Thomas Lenard, senior fellow and president emeritus at the Technology Policy Institute, “price is a proxy for a whole bunch of attributes.”  In Jason Lanier’s description “Let us spy on you and in return you’ll get free services.”  If Data is the new Oil, personal data is the jet fuel that powered Google, Amazon, and Facebook into the world’s most valuable companies top ten.[11]   The price users pay is to allow Facebook to use their personal information. In other words, the “price” consumers pay for social networking apps is the privacy of their personal information.  Hence, we can look at the role of providing personal information as the “price” of social networking, and at the same time look at harms caused by the loss of privacy.  This interpretation is not mine alone.  Wired magazine’s June 2017 article “Digital Privacy is Making Antitrust Exciting Again” quotes Andreas Mundt, president of Germany’s antitrust agency, Bundeskartellant, saying he was “deeply concerned privacy is a competitive issue.”[12] The FTC Horizontal Merger Guidelines clarify that non-price terms and conditions can also adversely affect consumers, and that non-price attributes can be considered as price.  Further if the market is one of buyer power, the same analysis can be conducted for the ‘monopsony’ situation.  So we can stay within the existing framework of the evaluation of mergers as being anti-competitive or not. An anti-competitive merger would result in market power for the merged company, typically in terms of pricing power.  However, as ‘price’ in this case contains the notion of private personal information, we can describe Facebook’s  as in Figure 1 below. 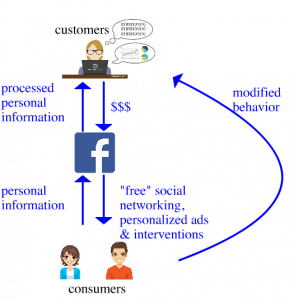 Figure 1. Information and Money Flows for Facebook The figure above illustrates that FaceBook is the purchaser of personal information from users, who, in exchange, get otherwise free services from FaceBook – a platform on which to build community and share (with that community, and with FaceBook).  Facebook rents this information to its customers who sell ads or otherwise attempt to modify the user’s behavior based on a personalized environment.   The determination of whether a merger of another company with FaceBook would be anti-competitive would thus include the effect of the price of service on other consumers.  Or, in the economics of social media, how would the required information sharing change for customers of the old company change under the Facebook merger?  Here are the pre-merger and post-merger information and money flows. 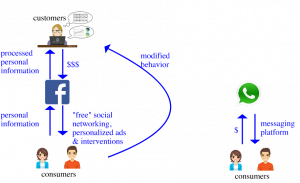 Figure 2. Pre-Merger Information and Money Flows for Facebook and WhatsApp 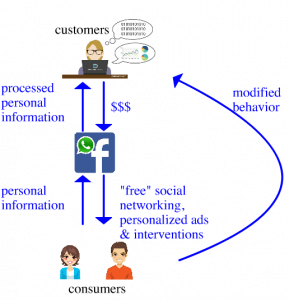 Figure 3. Post-Merger Information and Money Flows for Facebook and WhatsApp I contend that through the merger, Facebook forced WhatsApp out of its hi-privacy, paid business model into a low-privacy “free” market, despite WhatsApp’s history of insisting on privacy for its customers.  In the words of Tom Grossman, a senior branding consulting at Brand Union, from the Guardian, and quoted in Wired[13]: “One of the reasons why so many millions have flocked to WhatsApp is the added level of privacy the brand provides. In a world where your every word echoes endlessly across the internet it was a communication channel where sharing could take place on a more contained level. However, much like Google’s acquisition of Nest and Facebook’s of Instagram, with this purchase consumers are suddenly associated with, and have their information accessible by a brand that they didn’t buy into. It’s this intrusion that can make it feel uncomfortable, as both you and your data are seized without your say-so.” Theories of Harm As I pointed out in the previous section, there was no financial harm to WhatsApp users, as their paid service became free in time, as it was integrated[14] into the Facebook family.  As price includes a component of privacy, we need to look beyond monetary harm, and Daniel Solove’s Taxonomy of Privacy[15] is instructive in the evaluation of post-merger privacy harms. The Taxonomy describes the information flows and issues related to them. 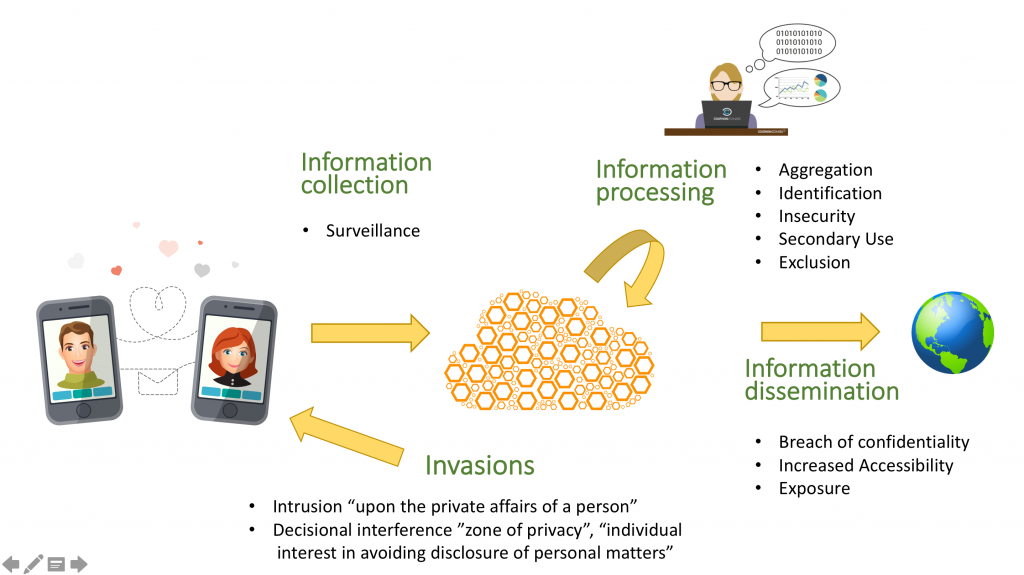