Controversy and the Progress of the Glo-1 Fiber Optic Cable

This stunning image of the many fiber optic undersea cables in the process of being laid down along the West and East coasts of Africa is treated by many as a sign of coming transformation of the continent. 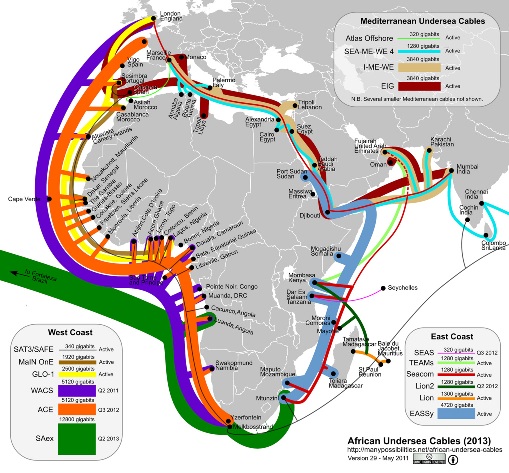 [image created and continually updated over at Many Possibilities]

A recent article titled ‘Glo 1 Cables At Risk’ in Ghana’s Daily Graphic newspaper (June 13, 2011, by Charles Benoni Okine) suggests some concerning and certainly (for residents) very annoying problems in connecting this cable from the coast into the next phase of infrastructure building on land. The cable in question is the one in yellow on the above map. The article is a helpful illustration of some of the problems of business management and service delivery that remain.

In summary: residents accuse the contractors hired by GLOBACOM to lay cable infrastructure within Accra of doing a shoddy job. Note this is preliminary infrastructure building work, not quite the ‘last mile’ delivering Internet access to buildings. Residents in certain areas of Accra received a letter requesting access to their land with promises that after laying the cable the land would be restored to its prior state (within 24 hours in the case where cement driveways have been demolished). It’s the rainy season in Ghana right now. Some residents are now saying trenches dug have not been properly resealed and have opened up in the rains. Driveways “have either not been restored or have been patched with sand and stones instead of cement.” One affected resident noted, “I cannot invest in cementing my home only for another company which wants to make money to destroy it with impunity.” As a result residents are threatening to pull out the cables to get the attention of the company and its contractors.

This entry was posted in notes. Bookmark the permalink.